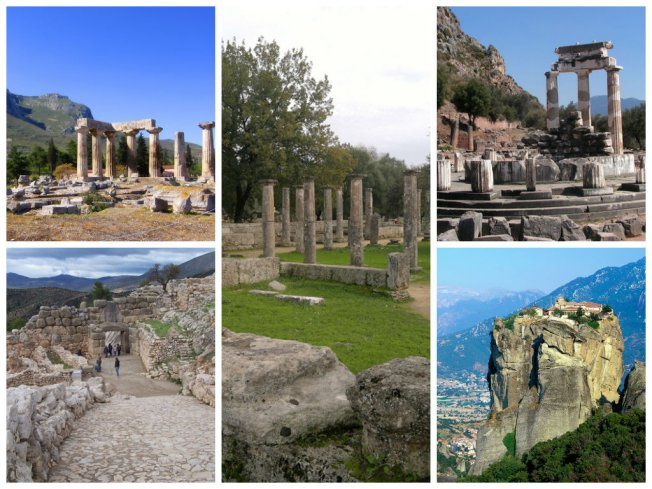 Day 1: Your 5 day tour will start with the drive through the National Highway to Peloponnesse. A stop by the famous Corinthian Canal or else Isthmus that unites the Ionian and the Aegean sea will be made, for pictures and coffee. We will then proceed, with the short drive, to ancient Corinth and its beautiful museum. Among other things you will see the temple of Apollo, the ancient agora and the bema (step) from where St. Paul speaks to the Corinthians in 52 AD. Our journey will continue with a 40 min. scenic drive along the coast of the Saronic Gulf. Reaching Epidaurus we will visit the spiritual sanctuary of Asclepius and the theatre with the most famous acoustic in the world. Leaving ancient Epidaurus we will continue with the drive to Nafplion, a picturesque sea port town on the Argolic Gulf. This was the first capital of modern Greece, it’s a city with beautiful monuments and neoclassical buildings as well as two famous forts Palamidi and Bourtzi which seats in an island opposite the port. We will be able to stroll around, take pictures and have coffee by the seaside or lunch in the "shade" of the tall neoclassical buildings next to Sydagma square. This is also the city we will spend the night. In the afternoon we will also drive and visit Mycenae, the centre of power in the late bronze age till 11th century BC. There lies the famous Lions Gate and the Acropolis where Agamemnon was murdered by his wife Clytemnestra and that is where will be able to explore all of its pathways. Leaving the Acropolis we will also make a short stop by the treasury of Atreus also known as a tomb of Agamemnon.

Day 2: We will start our day with the approximately 3 hour drive through the highway and the mountains to the other side of the Peloponnesse where Olympia is located. If you do not mind driving very windy roads we can also take the old road across so that we make stops by the picturesque mountain villages like Lagadia or Dimitsana, for coffee or lunch. As soon as we arrive in Olympia you will enjoy a 2.5 hour private tour through the site-birthplace of the Olympic Games, where still lie the ancient gymnasium, the temple of Zeus and Hera and the Olympic Games stadium. A few meters away from the site is where we will visit one of the most impressive museums in the world, since it houses the originals pediments of the temple of Zeus and Hermes by Praxiteles. Overnight stay in one of the small family owned hotels of either the town of Olympia or the hill next to it that overviews the valley of Ellis.

Day 3: We will start driving through the large and lush valley of Ellis and about 1.5 hour later we will pass the city of Patras and we will then cross one of the largest suspension bridges in the world, that connects the mainland to the Peloponnesse. We can then have a short coffee stop in the historical city by the sea called Nafpaktos in the waters of which the famous sea battle of Lepando was fought. The rest of our drive after this, will be absolutely impressive since we will be taking the coastal road having the sea on one side and the mountains of the Greek mainland on the other. We will also pass by some of the most beautyful fishing villages on the Corinthian golf and cross the largest olive grow in Greece next to the city of Itea, before we start our windy drive, up to mount Parnassus. In the elevation of 600 meters (1800 feet) are built both the ancient sanctuary and the modern town of Delphi. You will enjoy a private guided tour through the museum where the famous bronze charioteer is kept, as well as the site where the ancient treasury houses, the temple of Apollo, oracle, the theatre and the stadium still remain. On the way down you will also have time by the Castalia spring, the gymnasiums and the temple of Athina Pronaia. Overnight stay in the small town of Delphi with the amazing view down to there valley and sea.

Day 4: We will drive through the mountains to the other side where the city of Lamia is located and where we can stop for coffee. After that we will continue heading towards the largest valley of Greece, the one of Thessaly. We will pass several villages and grows until all of a sudden we will see ahead of us the huge rocks that seem like felt from the sky and that is why they are called "Meteora". Up there, in the caves lived the first monks in 1100AD, until the first monasteries will build and grow rapidly in the Byzantine years. Six of them are steal active and we will make photo stops outside each one of them. We can visit one in the afternoon and one the next day morning, as many as you would like to see from the inside, since most of them have a lot of steps. Overnight stay in one of the hotels in the city of Kalambaka.

Day 5: We can either start our day with a visit of another monastery, or with the drive back to Athens. Along the way you will see among other things and stop by Thermopylae, where in 480BC was fought one of the most historical battles in worlds history. We will also get the chance to see the tumulus of the Spartans soldiers. Along the way we will also pass the city of Thebes famous for Oedipus and the battle of Plateaa nearby as well as the area of Marathon where the other famous battle of the Medic war was fought in 490BC. Soon after that we will arrive back to Athens and drop you off at the hotel or airport.