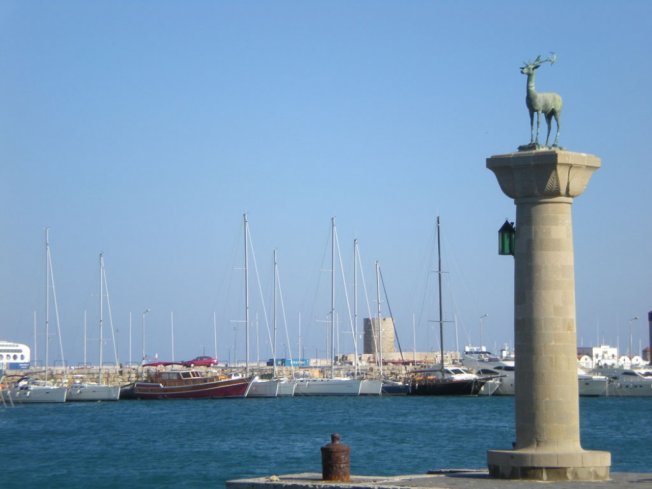 4 hour walking tour of the medieval town which is a unique world heritage monument protected by UNESCO. Your tour guide will meet you at the port where you are going to disembark. You'll be walked to the Old town (World Heritage Site), you'll pass through one of the gateways and by the Agora and the Collachium, where the Knights of St. John of Jerusalem lived and worked, building a stronghold of Christendom in the Eastern Mediterranean. Remaining remarkably intact, the Old Town is home to the churches, marble coats of arms of the Knights, canon balls, the inns of the Knights, and most impressive the restored Palace of the Grand Masters, where you will be given a guided tour.

Next comes the guided tour of the archaeological museum which is situated inside the medieval town in a magnificent building of superb medieval architecture that was built of the knights of the order of Snt John.

You are met and welcome at the port by your private tour guide.

Lindos was founded by the Dorians led by the king Tlepolemus of Rhodes, who arrived in about the 10th century BC. It was one of six Dorian cities in the area known as the Dorian Hexapolis. The eastern location of Rhodes made it a natural meeting place between the Greeks and the Phoenicians, and by the 8th century Lindos was a major trading centre. Its importance declined after the foundation of the city of Rhodes in the late 5th century.

In classical times the acropolis of Lindos was dominated by the massive temple of Athena Lindia, which attained its final form in around 300 BC. In Hellenistic and Roman times the temple precinct grew as more buildings were added. In early medieval times these buildings fell into disuse, and in the 14th century they were partly overlaid by a massive fortress built on the acropolis by the Knights of St John to defend the island against the Ottomans.

Above the modern town rises the acropolis of Lindos, a natural citadel which was fortified successively by the Greeks, the Romans, the Byzantines, the Knights of St John and the Ottomans. This makes the site difficult to excavate and interpret archaeologically. The acropolis offers spectacular views of the surrounding harbours and coastline.

On the Acropolis of Lindos today parts of the following buildings may still be seen:

After return to Rhodes town for the old medieval town tour that will include guided tour of the Palace of the Grandmasters and the archaeological museum. (details like Rhodes town walking tour).