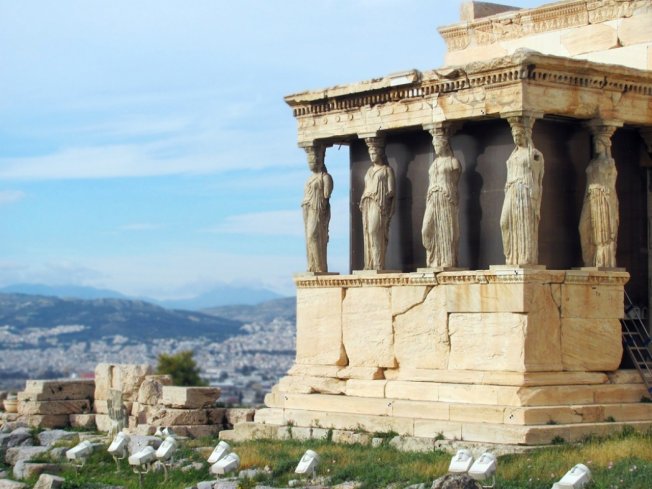 Driving from your hotel to the center of Athens your officially licensed tour guide will comment on the city's historical elements as you are viewing sights such as the Hadrian Arch of Triumph, the marble Panathenian Olympic Stadium, where you will be given time to take photos, the Temple of Zeus, the Tomb of the Unknown Soldier and the former Royal Palace which is now the Greek House of Parliament. You will also see the Athenian Trilogy on Panepistimou str. which is consisted by the University of Athens, the Academy of Athens and the National Library. After that you will drive to the Dionissiou Aeropagitou street where you will continue on foot to the new Acropolis museum.

Your guide will lead you to the New Acropolis Museum where you can walk on a glass surface viewing the ancient city of Athens under your feet. Besides the museum exhibits on the top floor you will be able to take a good look at the Parthenon through the glass walls of the museum. For those who do not wish to climb all the way up to The Acropolis this is the next best way to admire this superb monument which is recognized as the culmination of Greek Architecture.

Leaving the Acropolis museum next comes the guided tour on the Acropolis Hill. For those who do not wish to climb up to the rock alternatively they will see the ancient Agora and have more time in Plaka and Monastiraki. Climbing up the Hill there will be several stops made, for your guide to explain and you to admire the monuments of Herodion Music Theater, Pnyka, Philopapous Hill, Marsh Hill or Areos Pagos, the Ancient Agora, the Temple of Nike, the Propilaia, the Erechthion, and finally the Parthenon.

From the Acropolis Hill you will descent to walk outside the Ancient Agora and stroll around Plaka area the old city of Athens. There you will walk among well preserved neoclassical buildings where people still have their residence and excavations that revealed the ancient city beneath.

Monastiraki (Flea Market) is a very interesting walk through small shops one next to each other that practically sell everything from Antique items and Art to used clothing and gramophone records.

Tweet
Published in One Day Tours
More in this category: Athens Walking Food Tour »
back to top