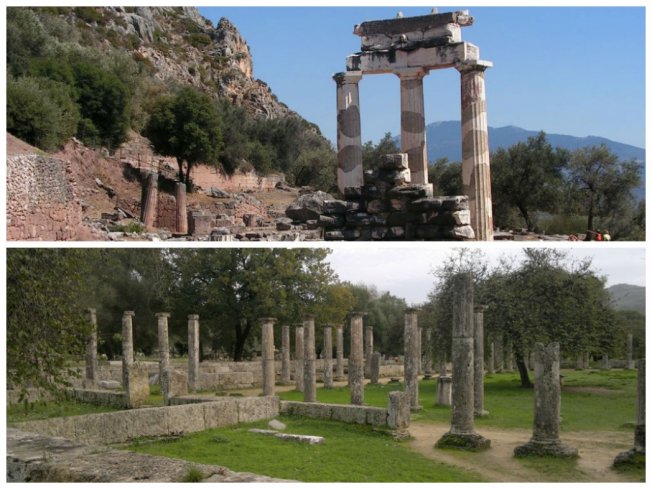 This is a tour for those of you that do not have much time to spend out of Athens but still want to see as many of the Greek highlights as possible.

Combine two of the most famous Greek archaeological sites, Delphi and Olympia, and drive through some of the most picturesque and historical parts of the Greek mainland and the Peloponnesse.

Day 1: Drive through the freeway towards the northern part of the city of Athens and see the mount Pendeli from where the marble for the Parthenon came. Part of the valley where the famous battle of Marathon was fought and continue the lush and fertile valley of Thebes to see from a distance the hill on top of which Oedipus solved the enigma of the Sphinx and saved the ancient city.

On your way you will also see the artificial lake of Marathon which is the water supply for the city of Athens.

Past the city of Levadia you will start driving up the mount Parnassos and enjoy a small stop at the picturesque village of Arachova.

Arachova is only half hour away from Delphi where the unique setting of the Fedriades rock formation is found, created by Zeus' thunderbolts indicating the naval of the earth. In Delphi, your tour guide will give you a 2 hour private tour of the museum in which one can see among other archeological treasures, the unique bronze statue of the charioteer. Then proceed though the sacred way to the Athenian treasury, the stoa of Athens, the temple of Apollo, where the oracle was and the theater. On your way down you can stop and drink water from the ancient sacred Kastalia spring, where all visitors would get purified, before entering the Oracle. Nearby lays the ancient gymnasium and the site of Athena Pronaia.

Enjoy lunch in the small town of Delphi and then start your trip to Olympia. Your trip will be absolutely impressive since you will be taking the coastal road having the sea on one side and the mountains of the Greek mainland on the other. You will also cross through the largest olive grow in Greece next to the city of Itea and pass by some of the most beautiful fishing villages of the Corinthian golf. A short stop will be made to have coffee by the Venetian walls of the port in the historical city of  Nafpaktos where the famous sea battle of Lepando was fought.  Then crossing one the largest cable bridges in Europe you will pass from the Greek mainland to the Peloponnesse. After a trip through the large and lush valley of Ellis and about 1.5 hour later you will arrive at Olympia. Dinner at a local taverna. Overnight in Olympia.

Day 2: The next morning, after having breakfast, you will enjoy a 2.5 hour private tour through the site - birthplace of the Olympic Games, where still lie the ancient gymnasiums, the temple of Zeus and Hera and the stadium. A few meters away from the site is where we will visit one of the most impressive museums in the world, since it houses the originals pediments of the temple of Zeus and Hermes by Praxiteles. After your private guided tour you will have a short stop at the modern town of Olympia and then continue your journey back to Athens.

The drive to Athens is approximately 3 hour through the highway and the mountains to the other side of the Peloponnesse. If you do not mind driving very windy roads we can also take the old road across so that we make stops by the picturesque mountain villages like Lagadia or Dimitsana, for coffee or lunch.

Afterwards a stop by the famous Corinthian Canal or else Isthmus that unites the Ionian Aegean sea will be made, for pictures and coffee. The Corinth Canal is only a 45 minutes drive from Athens where your tour will end.