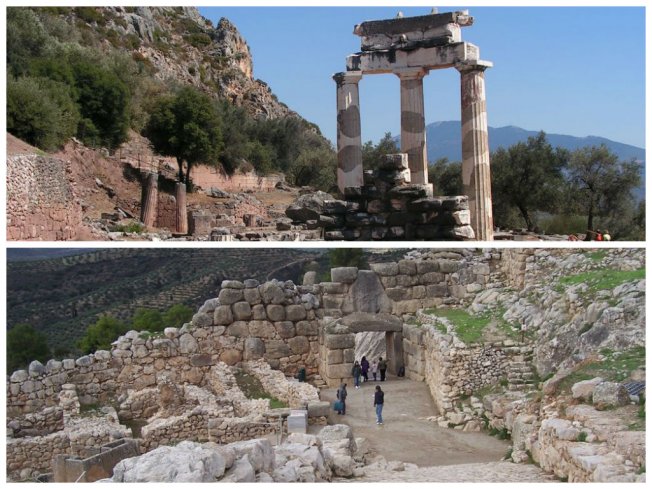 This is a tour for those of you that do not have much time to spend out of Athens but still want to see as many of the Greek highlights as possible.

Combine two of the most beautiful areas in Greece, Delphi and Argolis, and drive through some of the most picturesque and historical parts of the Greek mainland and the Peloponnesse.

Day 1: Drive through the freeway towards the northern part of the city of Athens and see the mount Pendeli from where the marble for the Parthenon came. Part of the valley where the famous battle of Marathon was fought and continue the lush and fertile valley of Thebes to see from a distance the hill on top of which Oedipus solved the enigma of the Sphinx and saved the ancient city.

On your way you will also see the artificial lake of Marathon which is the water supply for the city of Athens.

Past the city of Levadia you will start driving up the mount Parnassos and enjoy a small stop at the picturesque village of Arachova.

Arachova is only half hour away from Delphi where the unique setting of the Fedriades rock formation is found, created by Zeus' thunderbolts indicating the naval of the earth. In Delphi, your tour guide will give you a 2 hour private tour of the museum in which one can see among other archeological treasures, the unique bronze statue of the charioteer. Then proceed though the sacred way to the Athenian treasury, the stoa of Athens, the temple of Apollo, where the oracle was and the theater. On your way down you can stop and drink water from the ancient sacred Kastalia spring, where all visitors would get purified, before entering the Oracle. Nearby lays the ancient gymnasium and the site of Athena Pronaia.

Enjoy lunch in the small town of Delphi and then start your trip to Argolis with the drive through the National Highway to Peloponesse. A stop will be made by the famous Corinthian Canal or else Isthmus that separates the Peloponnesse from the Greek mainland, for pictures and coffee. Your journey will continue with a 40 min. scenic drive along the coast of the Saronic Gulf. Overnight in Nafplion, the first capital of modern Greece, a city with beautiful monuments and neoclassical buildings.

Day 2: After having breakfast in Nafplion, you will drive to Epidaurus, where you will have a private tour of the spiritual sanctuary of Asclepius and the theatre with the most famous acoustic in the world. Continuing your journey you will also drive and visit Mycenae, the centre of power in the late bronze age till 11th century BC. There lies the famous Lions Gate and the Acropolis where Agamemnon was murdered by his wife Clytemnestra and that is where will be able to explore all of its pathways. Leaving the Acropolis you will also make a short stop by the treasury of Atreus also known as a tomb of Agamemnon. Afterwards, you will take the road back to Athens.